As I’ve mentioned, I didn’t enjoy Me-Made-May this year. It wasn’t a challenge, and I was basically just wearing a dress every day – the same as normal, but with a couple of options taken out; it wasn’t worth it. What I did discover, though, was that I’d like to have more me-made cardigans and jumpers – partially because I’m generally low on cardigans, after a couple falling apart, and partly to spice up an outfit a little. This is my first success in that! 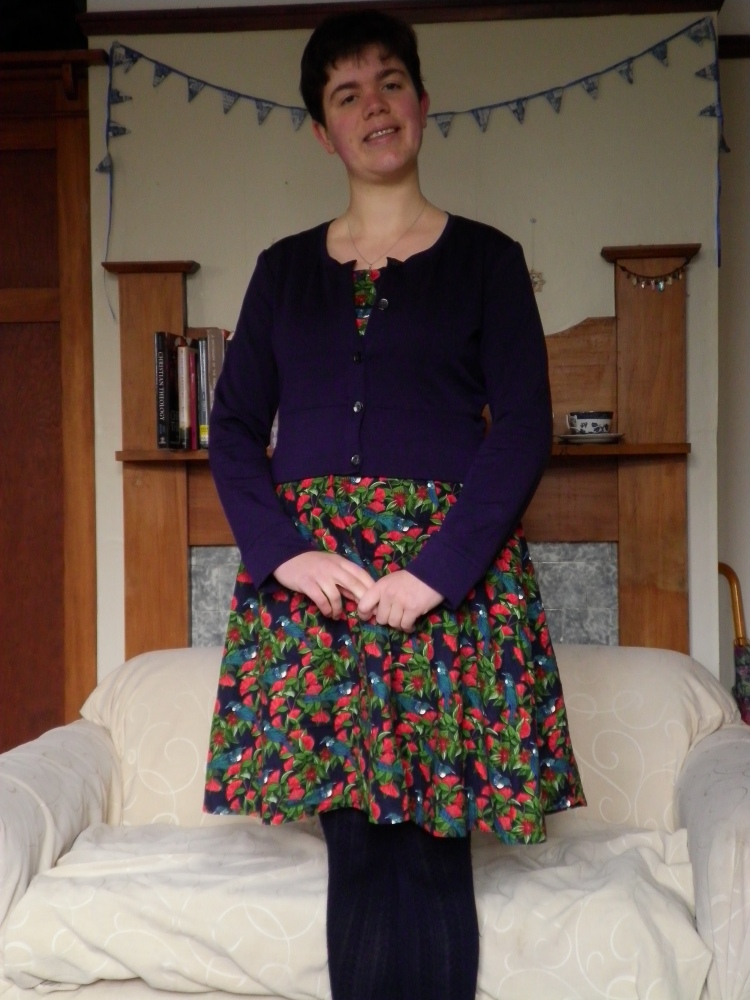 You can kinda see my mood at the moment, through what I’ve been making. Today it’s a merino cardigan, the next will be a knitted jumper – I actually finished the two on the same day, the day before leaving for a holiday (so I could pack them both). Today is the shortest day of the year, so I think I’m justified in feeling cold and dressing for such. This cardigan is the same merino knit I made my merino dress out of out of; I bought 2 metres of the fabric, and still have half left, because of how wide it was. I am deeply happy with the knit. It is warm and squishy. I am possibly less excited with the cardigan itself- it does go well with what I wear, yes, but it’s perhaps slightly different to what I usually wear – the cropped, fitted top is not a usual one that I can see, and it can make me feel self-conscious. Sewing is great for making what you wnat to wear, but what happens if you then discover you’re too shy to wear that? Mostly I just deal with it, but I haven’t worn this one out yet (because of the knitted jumper, I’ve been wearing it every day instead…) so I haven’t had time to assess how shy I feel in it.

This is the Jenna cardigan, from Muse Patterns. I’ve been admiring it from afar for a long time. I can now admire it from close up, which is happy. It’s my favourite to use of the pdf patterns I’ve seen – the lines are narrower, which is good for matching up neatly, and I loved that there was a table with which pages to print for which views (noting that I was really happy about this, and then proceeded to completely fail to use it – I accidentally printed the whole thing). I’ll definitely use it again, with a couple modifications – I want to turn it into a v-neck, and probably do the longer variation with just a hem instead of the band, to make it a more casual cardigan, like my usual wear. In fact, I’d do that right now, if I didn’t have a deadline for a gift for my sister to be sewn this week.

My buttons are from Spotlight, silverish ones. I quite like them, but they do contribute to making it a little more showy than my normal cardigans – not a lot, but it’s enough that I notice. I also topstiched in navy thread, which I definitely like, since it adds a little definition around the seams. I think this is pretty well constructed, by my standards, if it is unsure in favourite-ness. It’s definitely wearable, though.

My favourite thing about this is the way it goes perfectly with everything I wear. As a sample:

You can also see the cardigan better in this. Note: The reason the top two buttons are undone is that I ran out of the right colour thread, with so little left to go…

This also doubles as my second completion of my sewing dare from Gillian at Crafting a Rainbow – to sew something from a knit. To be fair, the same knit. She also dared me to sew the Granville shirt, which was going really well until the cuffs were half an inch too short for the sleeve end – which I worked out immediately after trimming the seam allowances (you’d think I’d learn – I’ve done this before). So it’s sitting on my sewing table, back in Dunedin, because I have to work out what to do with it. I cut this cardigan at the point I realised the problem – I didn’t have the patience to work on it immediately.

And for fun, a photo with the dress of the same fabric. It’s like a two-set thing! 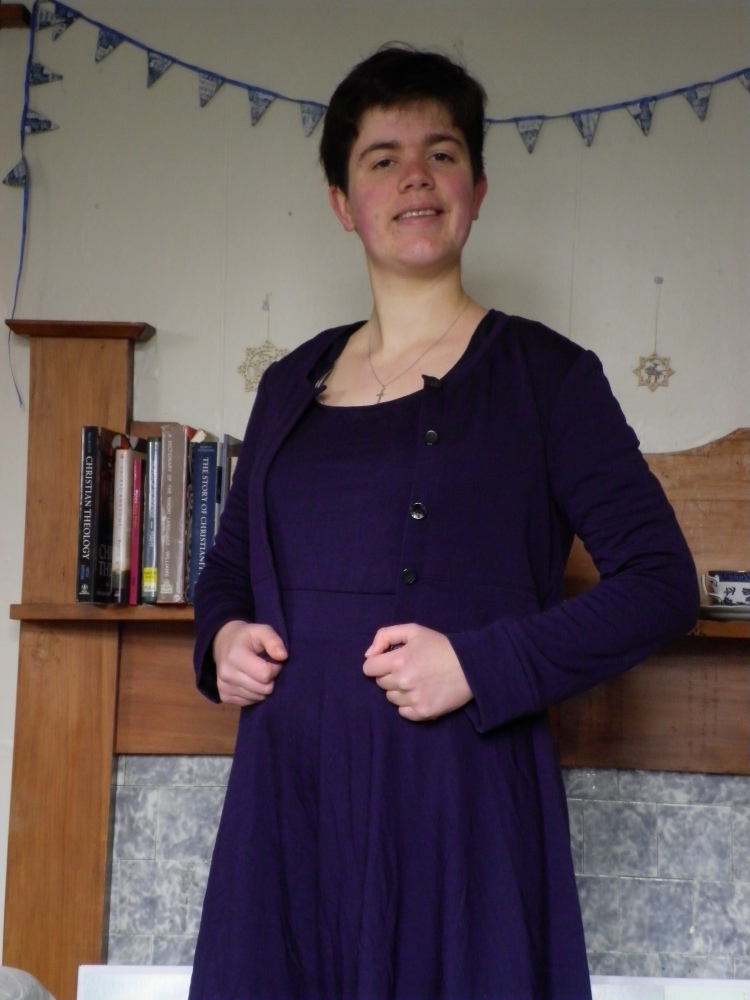