This, here, is a knit that got away from me.

I was planning something basic, boring, and easy to wear, to fill out my work wardrobe. Navy in colour, with maybe a little bit of variegation – I was dyeing the wool myself, so I should be able to get what I wanted.

Just a little lace up the back, I thought, something not too ostentatious. And maybe something matching it next to the button bands, because I like that detail.

Then I dyed the wool, and instead of subtle shades of navy, I got this: 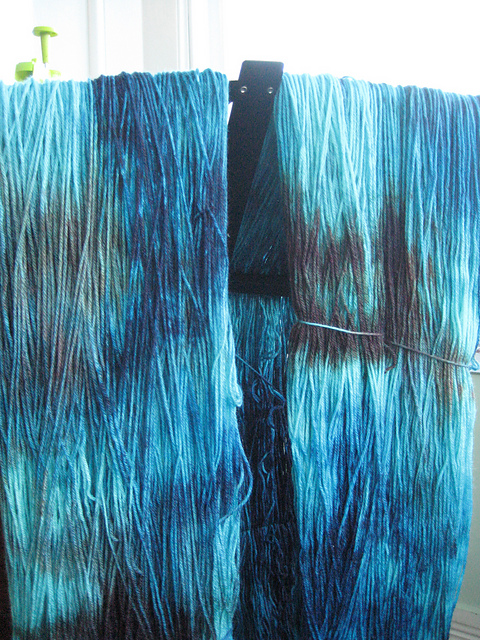 I think we can agree that that is not subtle.

I overdyed it, and it wasn’t perfect, but I decided to go for it anyway – I really like one of the tones I achieved, the colour of the ocean in its best mood, and I didn’t really want to compromise that. So off I went.

The next thing was to choose a pattern. I couldn’t find a single pattern that had both set-in sleeves and a lace I liked, so I chose a pattern for the shaping and found a stitch dictionary at the library to search out a nice lace for the back. At this point I was still aiming for relatively low-key, but probably this was the moment of getting carried away. Instead of choosing one pattern, I picked TWO from the book (looking for what it’s called – it’s back at the library now) and spent some time swatching both and trying to fit them into the same number of rows for the repeat (one started out 12-row and the other 14-row repeats – I fudged things until both were 16-row instead, I’m actually pretty proud of how I did that).

I rather think that that isn’t basic or boring either (photo from halfway through the knitting of it).

After making the thing I redyed it, and I think it’s a little more subdued, and absolutely gorgeous now – I’m loving the wearing of it.

I mean, still not boring. So I didn’t quite achieve that. Worth it, though.

Something new that I noticed with this knit is how much difference blocking it actually does make – this fabric gained a lot of length when it was washed, and it smoothed up beautifully. It makes a fantastic fabric. In fact, I loved knitting with this all round – it’s a merino heavy fingering yarn from Skeinz (in the Naked Skeinz range), and it’s got to be my favourite weight to knit – somewhere between this and double knitting. Either too small or too big give my fingers cramps… Therefore, it was incredibly satisfying and also incredibly fast to knit up. It also took a lot less to make than I thought – I bought 400g, but probably used only 250 (note. Should actually weigh this to check). Which means plenty of gorgeous blue yarn for a shawl… (My 8-year-old friend is angling for a cardigan of her own – she’s asked me about both this yarn leftovers and my handspun. Perhaps I need to just teach her to knit.)

I am not terribly satisfied with the shoulder shaping on this, unfortunately. It tends to slip off at the front – you can see in the photo above. I’m seriously considering making my own pattern next time – I have sewing patterns that I know fit me, and then it’s “just” a matter of much maths to put things together and get the same shapes as the pattern. At least after all that maths I should get something that fits right.

In the midst of all the knitting, there has been much class. I’m six? seven? weeks out from the last exams of my degree (I don’t finish till November next year, but the final year involves no exams – just putting into practice what you’ve learnt in theory over the previous five years). As you can imagine, this is a bit of a stress. It’s hard to work out how to study and also look after myself, and it’s hard to believe that the exams will go ok – it feels like there’s an awful lot to learn, and I don’t know anywhere near enough yet. Some part of me believes that it’ll all be fine, but a lot of me finds that hard to trust. But I will get there, I hope, and I am greatly looking forward to next year, because I have enjoyed the fragments of usefulness and purpose I’ve found in the hospital in the last two years, and that becomes normal not occasional in sixth year, according to everyone I’ve talked to. I do actually enjoy medicine, and it will be good to be in a place where I can be acting that, not just learning.

And in other news, spring has sprung. I have baby tomatoes, and today I greeted the new tiny pea sprouts, and look at my flowers:

(yes, ok, that last one isn’t a flower YET but it will be one day, we hope – it’s my purple cauliflower)

5 thoughts on “the ocean cardigan”