I just found this unpublished post – who knew it was here. It’s a bit of a relic, given that it was written in May; I’ve given away a few of the items tracked in here since then (I’m doing much better at giving away things I don’t use/wear recently. Better to be loved by someone else).

My goal for Me-Made-May was to wear every me-made thing that I own, that’s at least vaguely seasonally appropriate. In order to facilitate that, I spent some time yesterday sorting through things that I own, photographing everything I could find (note: I’ve found at least two more things that I had forgotten about already), and categorising. Otherwise, how will I know? This was enough fun that I thought I’d share – only 3 of the 70(!) items I tracked down are pre-blog, although not all have had proper photos, so it’s a track of the fiveish years I’ve been making clothes. I have given away a number of things over the years, although it’s always a wrench – hopefully seeing everything I have will help me to hold lightly to things I don’t wear!

(This is just as much for me as anyone else – I find it interesting to see what has survived.)

Starting with the things that get a free pass through this month for various reasons:

Four very summery dresses: the far right is the first garment I made, 6 years ago. The second from left does get a pass due to the weather – but probably should go in the donation pile at all. I’ve tried fixing it a few times, but it just doesn’t fit (I finally made my peace with giving it away last week).

Four dresses in the repair pile: the right two are worn frequently enough when whole that I don’t worry about whether they ought to stay in the wardrobe or not. The left two need some hem attention.

Seven weather-appropriate dresses: four of which get worn relatively regularly; the cream one in the centre just feels a little saccharine to me, although I wore it the other day and got a compliment before I even made it to morning handover, so that’s a good sign I guess. The black/gold and purple also need more love. 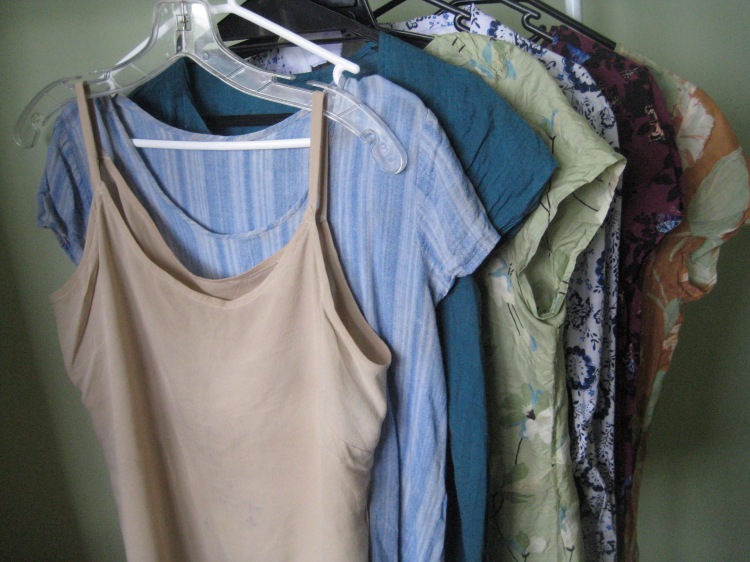 Seven woven tops: I wear three of the four Scout tees every week, being my staple work wardrobe, and the camisole at the front is a new addition in the last few months that’s getting a lot of love. The green silk top just doesn’t fit that well, and the long-sleeved Granville shirt got a dye stain fairly early in its life in the wash (which now has been bleached out, and it’s awaiting re-dying in the near future). Also it needs ironing every time I wear it which makes me less enthusiastic.

Six knit tops: Yes, this photo is only five – there’s another merino Plantain that I can’t find at the moment, but it’s pyjamas when it’s around, so lots of wear. The stripe tee is mostly for gardening, and the purple one is slowly dying with holes.

Seven skirts: also known as: far too many skirts for my number of skirt hangers. Only two of these get regular wear, and one has been worn once and passed on into the donations box already this month. I think I can work the red linen skirt into my wardrobe, if I lengthen the back vent a little – it tends to ride up, and I’m hoping that’ll fix the problem. The others are all in the questionable basket.

Seven cardigans and sweaters: I am attached to any sweater I’ve knitted myself, so although I don’t really wear either of the green ones, I don’t know what to do about that! I really ought to re-knit the waist of the centre back sweater, and then I might wear it more, but have never quite brought myself to do that – and I’m worried it may have felted enough to make that not really an option. The bottom right is my first ever handknit sweater and as such has even more sentimentality (but I managed to get rid of it. Finding that it had moth holes sped up the process – it’s definitely not worth mending to me). 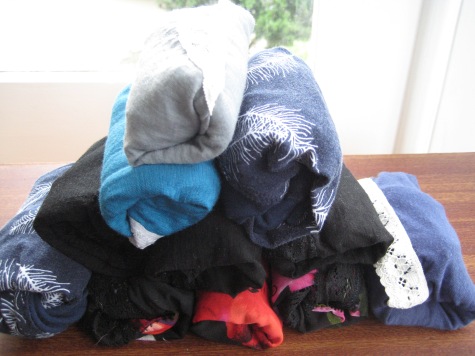 11 pairs underwear and 4 bras: underwear actually get a pass on the must-wear-in-May, because there are three pairs there that are less comfortable but invaluable on weeks when my washing is delayed.

One pair leggings and one bikini: the leggings probably ought to be first on the give away list, not at all comfortable unfortunately. The bikini is clearly unseasonable, but beautiful (and worn in May! Moving to Gisborne for a few weeks did that).

Seven handknit accessories: ok, some of these are in the mend basket – and there’s one more pair of socks in the mend pile that I couldn’t just put my hands on – but we’ll see how the weather goes with regards to the full-on mittens, anyway. 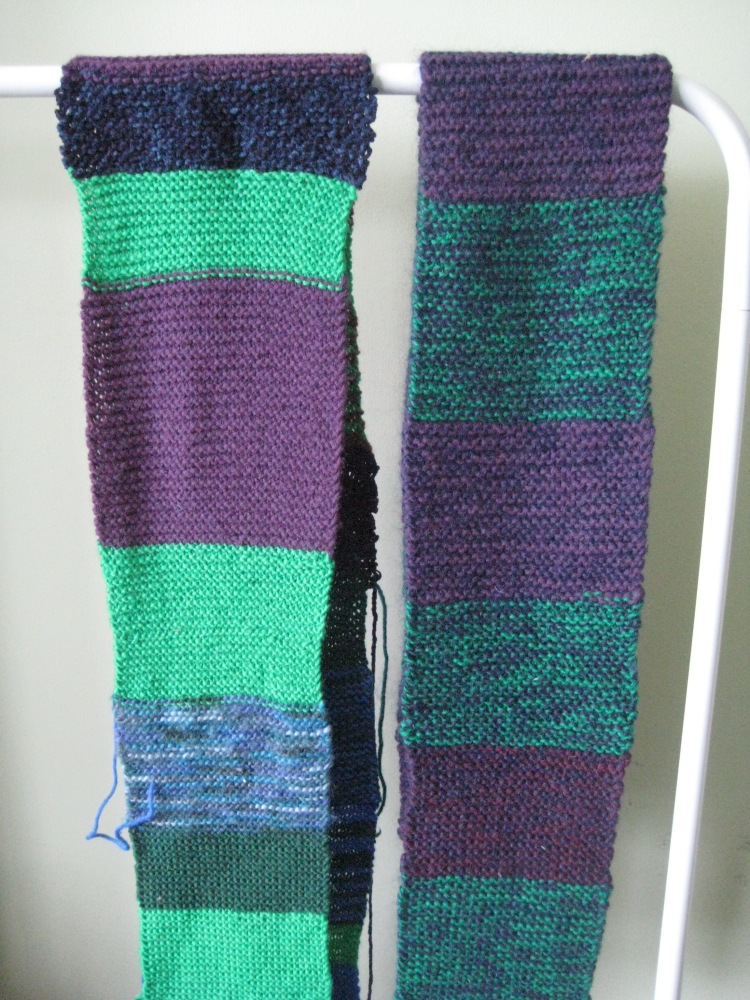 And finally, two very old handknit scarves. One of which, as you see, never got the ends sewn in. I’ve never really worn either of these – they’re both pretty scratchy tbh – and am thinking these are going into the give away pile – I’ve been hanging onto them for reasons of sentimentality, because they were knitted pretty early in me getting into knitting (in high school I think?), but I don’t really think I need to own them any more (gone!).

After photographing everything I realised I forgot my pyjamas! However, they are getting plenty of wear anyway. Pyjamas are a great project if you’re after value per wear!

I hadn’t realised quite how much I own that I’ve made. It might not be my whole wardrobe – and I’ve made my peace with possibly never getting to 100% handmade – but it’s still a pretty substantial chunk there. It’s really just tights that I have 100% shop bought, and then a few tops/cardigans and one or two dresses. And that’s it!

As it happened, I didn’t quite manage to wear or get rid of everything in May, but I made a pretty good shot at it. My wardrobe is looking rather a lot better now, more full of things I enjoy actually wearing. So that was overall a success!